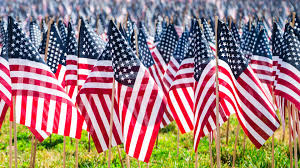 Memorial Day, May 31, for many Americans, conjures up images of hamburgers, hot dogs, swimming pools, and summertime . But the last Monday in May serves, most importantly, as a time to honor those who died while fighting in the U.S. Armed Forces. It’s a holiday steeped in somber American history and tradition. The day actually began as “Decoration Day,” following the Civil War, when mourners placed flowers on the graves of Union and Confederate soldiers. Yes, Memorial Day has also come to signify the “unofficial” start of summer, but let’s remember the heroes who made it all possible.

TRADITIONS OF THE DAY

Many Americans observe Memorial Day by visiting cemeteries or memorials, holding family gatherings, and participating in parades. It’s the three-day weekend that kicks off the summer season and the time for hanging at the beach and lakes, and barbecuing with friends and family. But Memorial Day is also the most solemn American holiday — a day to remember those who made the ultimate sacrifice while defending their nation.

Towns and cities across the country host grand Memorial Day parades every year, often featuring senior veterans and military personnel. Some of the biggest parades take place in New York, Chicago, and Washington, D.C. Cemeteries and memorials are also visited by Americans, with some citizens wearing or holding red poppies to symbolize those who have fallen in war. This tradition has been around since World War I. Weekend trips and parties are also arranged to balance out the somberness of the day and welcome the summer.

Multiple cities claim to be the birthplace of Memorial Day.

According to the Library of Congress, President Lyndon Johnson declared Waterloo, New York, to be the “Birthplace of Memorial Day,” referencing a celebration the town had in 1866. However, other places are known to have celebrated the holiday earlier, and exactly where the first celebration took place remains in dispute.

It was originally called Decoration Day.

The holiday was celebrated by “decorating” the graves of fallen soldiers with flowers, flags, and more, hence the name “Decoration Day.” Over time, it became known as Memorial Day.

Although people were already decorating graves of fallen Civil War soldiers in an unofficial way, General Logan codified the holiday. “The 30th of May, 1868, is designated for the purpose of strewing with flowers, or otherwise decorating the graves of comrades who died in defense of their country during the late rebellion, and whose bodies now lie in almost every city, village and hamlet churchyard in the land,” he famously said.

Memorial Day wasn’t celebrated on the “last Monday in May” until relatively recently.

When General Logan officially launched the holiday, he called for it to be observed on May 30. After the Uniform Monday Holiday Act took effect in 1971, however, it was moved to the final Monday in May.

Logan may have chosen May 30 an interesting reason.

The date was selected because it wasn’t the anniversary of any battle in particular—well, according to legend, that is.

It’s customary for the U.S. President or Vice President to give a speech.

And traditionally, that speech is delivered at the Tomb of the Unknown Soldier at Arlington National Cemetery. Ahead of Memorial Day weekend, the 3rd U.S. Infantry also place American flags in front of Arlington’s over 260,000 graves and niches

Originally, only soldiers who had died in the Civil War were honored.

After WWI, though, the holiday began to encompass members of the American armed forces who had fallen in any conflict.