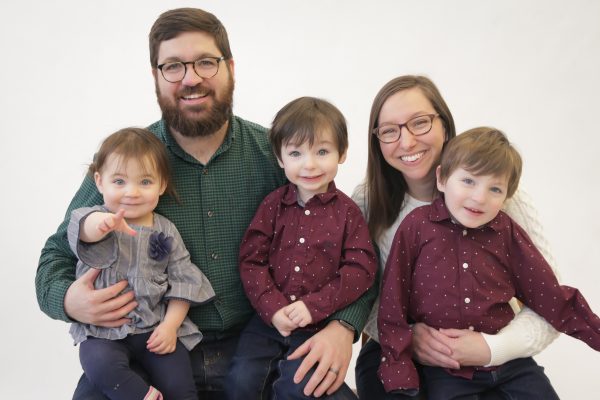 Evan and Lindsey Cornett are the proud parents of three young children. The oldest is a kindergartener at Harrison Park while the younger two are home with mom. Originally, from Orlando Florida, they moved up to Michigan almost 4 years ago. Evan received his PhD and now works as a research scientist at the Van Andel Institute. Lindsey is a stay at home mom but also works from home as a writer and teaches English classes online.

Although they miss their family and friends in Florida, they love living in Grand Rapids. They have learned to love the changing seasons and all there is to do around West Michigan. As a family, they love watching football, cheering for the University of Florida and the University of Central Florida, hanging out in their backyard with neighbors, playing board games and trying every coffee shop in the city.

They have always been passionate about public education and working with families and children. Even before having children, they knew they were committed to public education. They both had phenomenal teachers in school.They believe that strong public schools play a key part in building strong families, strong communities, and a strong culture. Since Evan is passionate about the sciences, research and the role of education in life, he wants to encourage education to help students learn to think.

Their oldest is in kindergarten so they are just dipping their toes into the GRPS water. Their son loves his kindergarten year, and they are so impressed with his amazing teachers. Although Harrison Park is not their neighborhood school they chose it for its special speech and language program, they offer in Kindergarten and First grade. He receives speech, occupational, and physical therapy, and the progress he has made this year has exceeded their expectations. The younger two children are also receiving speech resources already. They see so much intentionality, creativity, and resourcefulness here that gives them a lot of hope. When it comes to their children’s education, they want them to have as many opportunities as possible to learn from peers and adults who are different from them. Evan and Lindsey want their children to approach school (and all of life!) with curiosity and a desire to love other people well.

When the school year started, Lindsey just started showing up at meetings and made a point to introduce herself to the principal. It did not take long for him to let her know about the open PAL position. Since she wanted to contribute to help make the school stronger, she took the position. She enjoys getting to know other parents (most of whom have been at the school and in GRPS longer than she has!), learning what they love about the school, and hearing what concerns them. Evan and Lindsey are growing group of power parents in the GRPS.