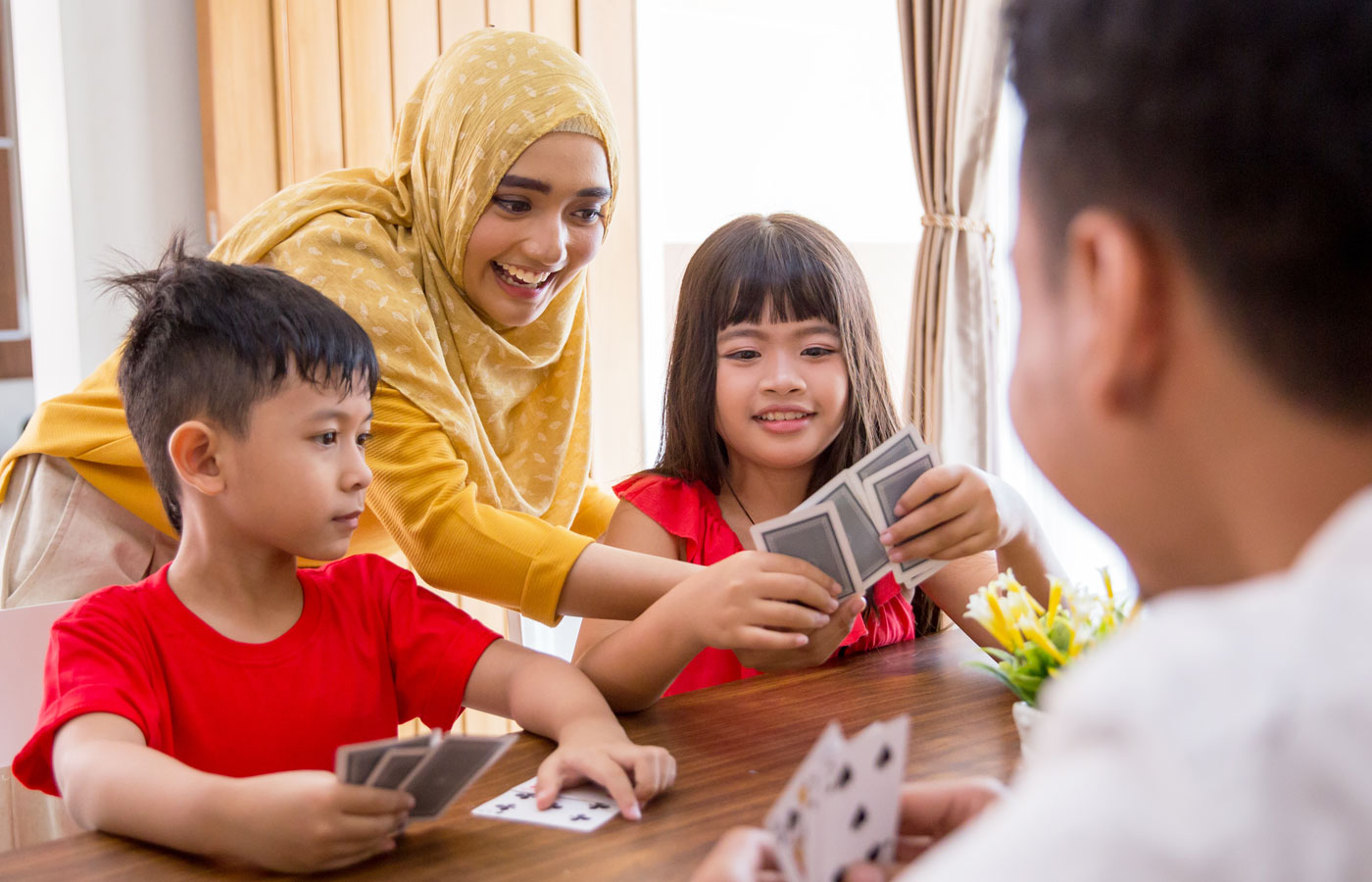 Math card games require no prep time and only a few simple supplies. Use them to practice math skills from basic counting all the way up to fractions and order of operations. These games are a sure bet!

Flip a card and add its value to your running total. First person to reach 100 without going over wins! (Remove face cards for younger players; use these values for older kids: Jack-11, Queen-12, King-13, Ace-0.)  Learn more: 123Homeschool4Me

Some versions of solitaire are really just sneaky math card games, and pyramid is one of them. Try to find cards that add up to 10 as you clear your pyramid row by row. Learn how to play at the link below.  Learn more: Multiplication.com

Your students probably already know how to play Go Fish, but in this version, they’re fishing for pairs that add up to 10. Have them ask: “I have a 2. Do you have an 8 to make 10?” Change aces to 1 for this game and leave face cards out entirely.  Learn more: Mrs. Weigand’s Mathematics Resources

4. Practice counting on with cards

Remove the face cards for this one, and grab a die. Players flip a card and roll the die. Starting with the number on the card, they “count on” using the number on the die. For instance, if the player flips a 7 and rolls a 4, they would say, “Seven… eight, nine, ten, eleven.” If they get it correct, they keep the card.  Learn more: Creative Family Fun

Play this math card game alone or as a team. Lay out 20 cards on the table (leave out face cards or change them to equal 0, while aces equal 1). Kids remove sets of cards that add up to 10, ultimately trying to remove all the cards from the table. It’s harder than you think!  Learn more: The First Grade Roundup

Simple math card games can help kids learn how to put numbers in order. To play builder’s paradise, discard the face cards and lay out the 4 sevens in a deck side by side. In each round, players work to add the next higher or lower number in each suit, trying to be the first to get rid of all their cards. Get the full how-to at the link below.  Learn more: Math Geek Mama

7. Add decimals to Make a Buck

Draw, swap, and discard to make a hand that equals $1. Learn what face cards equal and get all the rules at the link.  Learn more: Math Geek Mama

War is one of the original math card games, but this version adds a fraction aspect. Students deal two cards, a numerator and denominator, then determine whose fraction is the largest. The winner keeps all four cards, and play continues until the cards are gone. (Click here for more fun and free fraction games.)  Learn more: Mrs. Weigand’s Mathematics Resources

Remove the face cards and have each student lay out a 4 x 4 playing “board” of cards. The remaining cards (or another deck) are placed face down, and a caller flips over a card. Any player who has that number on their board turns the card face down. Play continues until one player has a row flipped over horizontally, vertically, or diagonally and calls “Bingo!”  Learn more: Top Notch Teaching

Math card games aren’t just for little kids; even adults will find this one a bit tricky. Each player is dealt four cards, then uses the order-of-operations rules to try to make a number as close to 24 as possible. Simple but challenging!  Learn more: Learn With Math Games

12. Take a gamble with triple-digit dare

Each player gets three cards and privately determines the highest three-digit number they can make (you can use decimals or not, depending on age). Then, each player has a turn to stick with the cards they have, swap with one from the deck, or steal one of the other player’s. All players then lay down their best number to see who wins. See more at the link below.  Learn more: Math Coach’s Corner

Each player deals two cards and lays them on the board. Then, round to the nearest ten to find the winner of that hand.  Learn more: Adventures in Third Grade

One of the terrific things about math card games is that many of them can be customized for various concepts and skill levels. The original goal of this game was to look at the cards you’re dealt to find ones that add up to 10, but it can be changed to 15, 20, or any number you choose. You can also add to the difficulty by allowing addition and subtraction (for example, you could use 8+4=12 or 12-2=10). Get the rules and free printable mats at the link below. Learn more: Mama.Papa.Bubba

15. Use Close Call to practice two-digit addition or subtraction

The best math card games are simple at heart. To play Close Call, each player deals themselves four cards then determines how to arrange them so they make two two-digit numbers that add up as close as possible to 100 without going over. For a subtraction version, work to get as close to zero as possible. Learn how to play at the link.  Learn more: Math Geek Mama

In this game, red cards are negative integers while black cards are positive. Students attempt to play pairs of cards that total 6 or -6. You can change the goal number as needed.  Learn more: Filing the Frame With Learning

17. Take a trip around the card spiral to practice math facts

You’ll need a pair of dice for this math card game. Lay cards out randomly in a spiral formation as shown, and set a marker for each player on the center card. Player one rolls the dice then moves their piece that number of spaces shown. They then must multiply (or add or subtract, depending on preferences) the card number by the number on the dice. If they get the answer correct, they stay where they are. If not, they return to their original card. Play continues until one player reaches the end.  Learn more: My Baba

18. Flip to make a prime number

Flip two cards. If you can add, subtract, or multiply them to make a prime number (use one or all of these operations), you get to keep them.  Learn more: Games4Learning

In this game, kids work to lay out the digits of pi in order. It’s a simple draw-and-play game, but will help familiarize students with this important number. You can write out the digits first or see who knows them from memory. Find out how to play at the link below.  Learn more: Math Geek Mama

Flip any three cards. If you can use them to form a valid number sentence (8-3=5), you keep the cards! Learn more: Games4Learning

21. Do some basic fast facts practice

Give your flash cards a rest and practice facts with math card games instead. Simply lay down two cards from the deck (remove the face cards first) and add, subtract, or multiply them. Kids can work on this alone, or you can make it a contest to see who can call out the correct answer first.  Learn more: Top Notch Teaching

22. Challenge them to beat the teacher

Practice place value by drawing cards and trying to build the largest number possible. Kids play against the teacher to see who wins! Get the rules at the link below. (Find more fun place value activities here.) Learn more: Relief Teaching Ideas

23. Read minds to figure out the correct numbers

Two students draw a card from the deck without looking and hold it up to their forehead facing out. A third student mentally multiplies the numbers and gives them the product. The students then must figure out what number each is holding. You can do this with addition and subtraction too. You’ll find this game along with dozens of other math card games in the free printable book at the link below.

Related articles from the May 2022 issue